Warning: "continue" targeting switch is equivalent to "break". Did you mean to use "continue 2"? in /var/www/akt-droplet.dk/public_html/wp-content/plugins/revslider/includes/operations.class.php on line 2734
 About the Droplet - Droplet

Atelier Kristoffer Tejlgaard and MARKANT have collaborated in developing a pavilion for the environmentally and aesthetically conscious consumer. The droplet is a fully transparent pavilion resembling a resting water droplet. The structure is an engineered self-supporting dome, which can function as a garden pavilion, greenhouse, mobile exhibition pavilion, recreational space or whatever your imagination allows you.

The droplet is born out of a desire to create a high-quality contemporary alternative to traditionally glazed greenhouses, though with the benefit of a sturdy and shockproof facade. The droplet consists of sheets in transparent 6mm polycarbonate sheets. The sheets are assembled with stainless steel nuts and bolts which allows for an easy and fast build and disassembly.

The shockproof polycarbonate easily withstands a blow from a football or a leaning bicycle, which allows it to be located near playgrounds, school yards or public spaces.

To prevent against unwanted garden pests and extreme weather conditions the droplet comes supplied with extended panels that anchor and seal the structure into the ground and allows controlled water drainage.

The curvature of the structure is generated by the rhombus shapes of the flat sheets and by displacing the holes slightly between the overlapping sheets in a controlled manner. The curvature of the facade gives the pavilion incredible strenght, which allows for the simple and thin facade without the need for internal load bearing walls or steel frames. This applies for both the 25 m2, 50 m2 and the 80 m2 droplet.

In order to reach the required precision, CNC-milling is used for the sheets, which are also dimensioned to take full advantage of standard sized polycarbonate sheets from the manufactorer.

With an oval profile and circular footprint the design maximises available floor space and standing height along the inside rim of the facade. The polycarbonate sheets are designed to overlap in a fish scale fashion, keeping the structure wind and waterproof, without the need for seals or caulk.

The droplet can be tailored to accommodate each clients’ needs - from the type of foundation to size, shading, facade solution, transparency level and interior layout. The price of the droplet begins at DKK 103.000 ex vat but will vary depending additional acquisitions.

For Kristoffer Tejlgaard personally, the fascination with domes, at first geodesics, started with the American architect Buckminster Fuller and his ideas about ecological design. Since Kristoffer erected his first geodesic dome at Roskilde Festival in 2011, several other geodesics has been added to the portfolio. An earlier project, Dome of Visions is a construction of the geodesic type. A method of engineering with which one can create strong and sturdy, but still delicate designs, by deliberately orchestrating the compressive and tensile forces of materials.

Today, the geodesic dome occupies a place in the history of architecture, partly due to Buckmister Fuller. During the fifties and sixties, Fuller used the geodesic dome structure in his work and theorised about geometrically optimal ways in which to construct domes. It was not until recently, that investigations revealed that the geometry he used in architecture originated from nature. Fuller therefore gave name to the family of carbon molecules of which the molecule c60 is a part. They are today known as “Buckyballs” or “Fullerenes”.

Fuller foresaw the scarcity of resources we are facing today. This made him call for “a design revolution” which could enable all of us to do more with less resources. According to Fuller, one source of improved resource efficiency was intelligent constructions. Fuller shared this perspective on architecture with newly established hippie communities who tapped into his knowledge of geometry and set out to construct cheap and resource efficient houses. The geodesic dome is therefore considered an icon of alternative architecture today.

The legacy of Buckminster Fuller lives on in the philosophy at the Copenhagen-based architecture studio, Atelier Kristoffer Tejlgaard. Building on this legacy, AKT keeps challenging the established construction industry in their approach to architecture and aims to keep experiementing in order to optimize the way we consume resources in our buildings. For this end, there are several approaches.

Specifically, in relation to the droplet, the design leaves the geometric principles of the geodesic dome, with a desire to meet modern industrial production methods and material dimensions, while retaining a high aesthitic quality.

Through 3D-modelling, it was possible to generate a geometry based on rhombuses, more suited for industrial production. With this geometry the material waste could be reduced by 62% compared to a geodesic dome structure based on pentagons and hexagons.

Along with the above mentioned properties, the droplet is specifically designed for disassembly. This way, all the materials used in the structure can easily be recycled when the pavilion no longer serves a purpose.

While going from a hemisphere to an oval form provides several advantages, such as full standing height along the inside rim of the facade, it also poses new challenges in the design phase.

The desired sheet sizes for the droplet is adapted to standard polycarbonate sheets, in order to take full advantage of the material. As the sheets are created from flat extruded polycarbonate and not curved cast polycarbonate, there is a limit to how much one can push the curvature, while retaining required strenght for the construction and a beautiful curved line along the facade.

The way this issue was resolved was by subdividing the sheets in a manner that provided the desired curvature while creating the least possible waste of material. After seeing a physical manifestation of the geometry working in a 1:20 scale model and reaching proof of concept as to how much the individual sheets can be bend without a breach, the prototype in full scale was build.

The droplet arrives to the building site on pallets, where the flat sheets for the facade contain an engraved number code system to ease the assembly process. The sheets measuring a maximum of 1x1m is easily handled by two people and even manageable by a single person.

The sheets are joined together with a person on the inside tightening the nuts, as the person on the outside holds the bolts and the sheet in place. No scaffolding or other heavy assembly supplies is necessary. A ladder, a few simple handtools, a bit of know-how and you are good to go.

Before the birth of the droplet and in relation to the contruction of Dome of Visions 2.0 in Stockholm, it was decided to erect a smaller 80 m2 pavilion at the Swedish Peoples Meeting, Almedalsveckan.

In part to announce that Dome of Visions now introduced itself in Sweden, but for the architect an opportunity to experiment further with the geometry of the dome, in order to optimize the design.

With the Almedal-dome, it was the first time the architect left the geodesic geometry that Buckminster Fuller revolutionized, in an attempt to optimize the geometry to the modern industry.

One of the challenges in the work with Dome of Visions 1.0 in Copenhagen, was to keep down material waste from the polycarbonat facade. The sheets consisting of pentagons and hexagons left smaller pieces in the production, for which there were no use in the project.

By leaving the geodesic geometry and seach inspiration in new places, the hope was to find a new geometry, that met the industrial-, static-, and aesthetic standards needed for Dome of Visions 2.0.

To minimise the amount of material used on the wooden structure beneath the transparent facade, which is essentiel both in an economic and aesthetic light, the polycarbonate facade must be self-sustaining.

The experiment with the smaller dome in Almedal, was thereby to challenge the properties of polycarbonate. Since the facade needed to be self-sustaining it was decided to completely leave out an underlying wooden structure in this smaller pavilion, in order to gain knowledge of the properties of the plastics.

The experiment was at large a success and proved to be a good foundation for the continued work with the geometry of Dome of Visions 2.0 in Stockholm and later with the droplet. 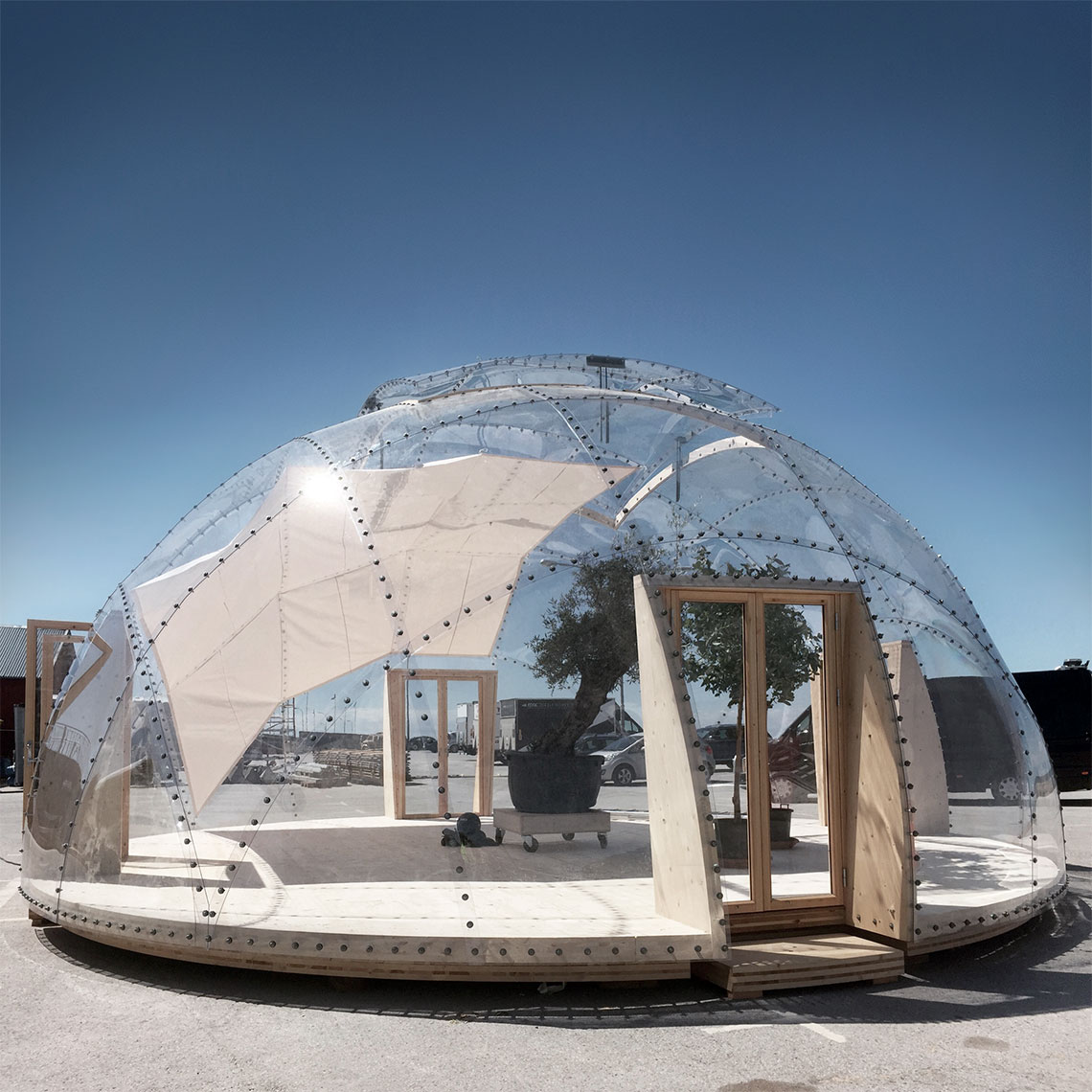 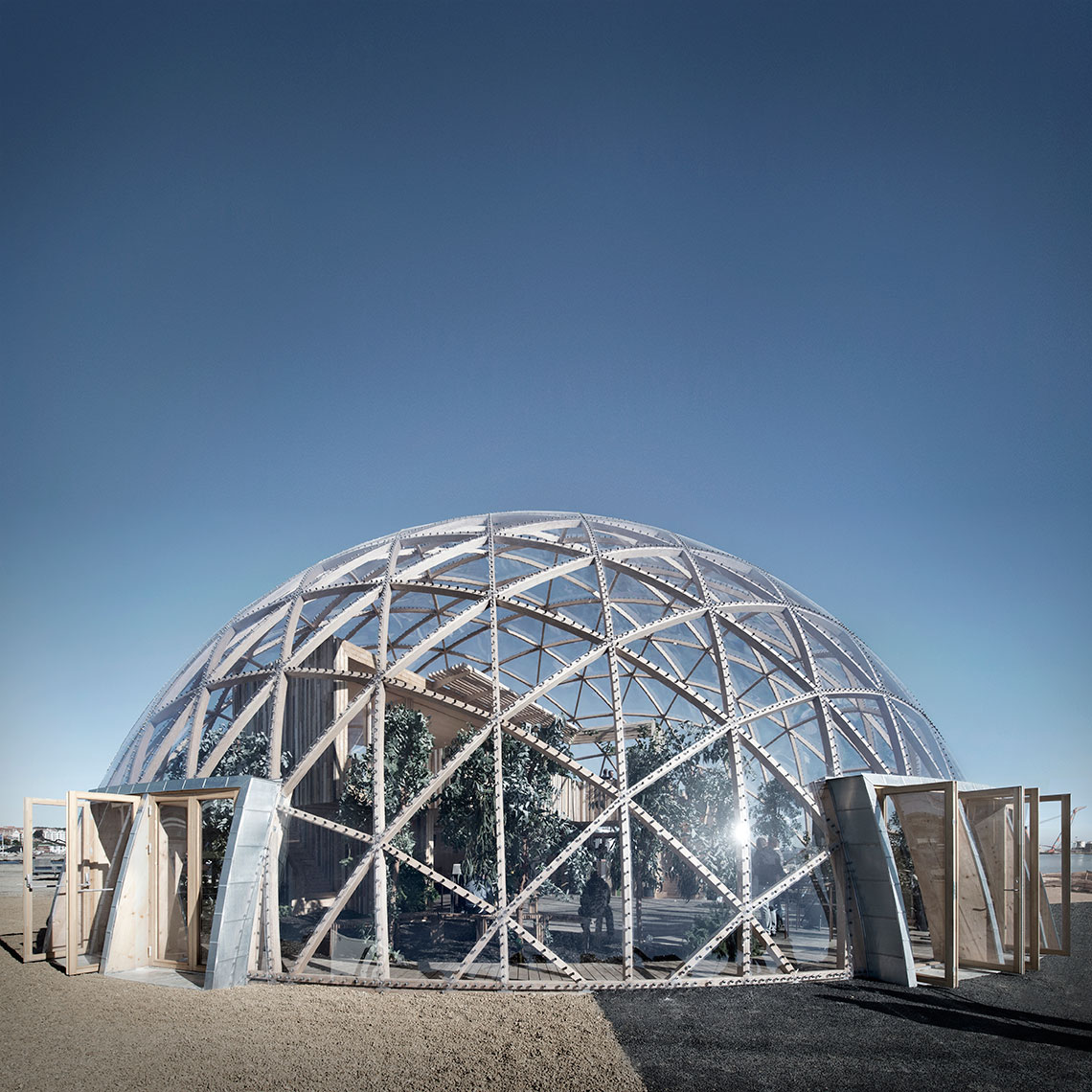